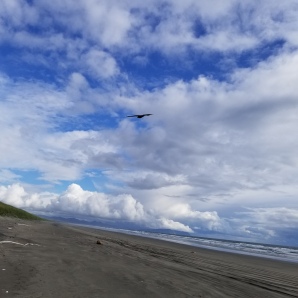 I may bitch but I have been able to walk alone in places like this almost every day since this all began and I know how incredibly lucky I am.

Finally, my gall bladder operation has been scheduled: June 26, which is to say, 13 days from now. I went in to see the surgeon for a pre op appointment – my second pre op appointment, because the first one, which was just as everything shut down, was deemed too long ago. Things have changed a bit. It turns out that if you must have surgery during the plague times, then you must also get a covid test 72 hours before the surgery and then isolate for those 72 hours. This is because if you have covid-19 while you have surgery, the survival rates, which for gallbladder surgery are like 98%, plummet to about 50% or less. Ha ha! Don’t worry! It will be fine!

Fort Stevens has reopened (yay!) but they are rebuilding the jetty and this is where I used to walk every day. I am unenthused.

I have been trying to be fairly smart about the whole pandemic / quarantine thing without going completely nuts. I keep thinking of a Bruce Sterling line from a 90s sci fi novel that offhandedly mentioned that people with indifferent hygiene practices had all been eliminated by the first wave of pandemics in the 2020s. I may have mentioned this before. It has been floating near the top of my cluttered junk shop brain since early March. Anyway, to be completely honest and out front: I am not the greatest at hygiene. My house is usually kind of a mess. There is dog hair. There is cat hair. There is what I call dog silt, which is a sort of grunge that builds up on things – I don’t know where it comes from and I don’t want to know. The floors are a bit sticky pretty regularly and they occasionally sprout those black blobs my darling friend Noelle used to call floor cancer. I do not vacuum enough. Sometimes the dishes sit for 24 hours. And etc. Basically, let’s face it: I am just not the kind of person who is capable of cleaning all her groceries with bleach. After one attempt, which led to despair – there is nothing like sitting on the kitchen floor, surrounded by groceries, with a bottle of bleach spray, crying, to bring the whole damn thing home – I gave up. I have made my peace with that reality and tried to be smart: masks and social distancing and washing my hands a lot and not having a social life, which, frankly, I didn’t have much of before the plague anyway. And so far, so good, or at least I think so good. I am on blood thinners, which makes me sort of high risk, but I’m not 60 yet nor will be for a few years, so I thought I was basically okay. Now, however, I am suddenly high risk and I must reassess.

This is complicated because my co-quarantiner, my son, has returned from several weeks of being not exactly the most quarantined person in Oregon. He had adventures and I’m glad for him, but not really glad enough to kick the bucket. He is back to help me out with the whole surgery thing but if he has brought covid with him, it is obviously not so good. So he needs to quarantine as well and take it seriously and I am not entirely sure this message is getting all the way through. It is difficult to get the message through when almost everything is open, the tourists are descending on us like locusts and the general feeling in this godsforsaken nation is that hey, plague time over, party time on! Or, as my son darkly just said, may the best immune system win.

My sign, less artsy than some I have done but to the point. It got wet at the protest because Oregon.

The US has apparently decided they are just going to let people die, which shouldn’t really be surprising, since it’s what they decided long ago about BIPOC (which, it turns out, does not mean Bi People of Color, but Black, Indigenous and People of Color, which I guess includes bi people of color, so, excellent.) We haven’t yet quite gotten to the point where people with covid are encouraged to die, but I won’t be shocked if we get there sooner rather than later. Too dark? Well, think about the BIPOC who are continuing to die every day at the hands of police while the protests are continuing. The USA is pretty goddamn dark right now. I can only take hope from the fact that the protests are continuing, that people have not yet given up. But as someone on Twitter pointed out, the protestors are pretty much the only people wearing masks right now. The people in bars, the people partying at the beaches – and the tourists are full force at Fort Stephens, it’s terrifying – and the people shopping their cares away are unmasked and uninterested in social distance. When Ross Dress for Less reopened I went to the health food store next door and looked on as Ross shoppers tossed their masks on the ground when they walked out. We are so screwed. I went to the new Grocery Outlet in Seaside when it opened on Thursday and masks? There were very, very few but high risk people? There were many. I give up.

Here in this tiny town, the protests are continuing but given my scary new status, I am sadly not going to be participating. This sucks so I will say, if you can protest, please do. Protest for me. I will get better and be back out there, I swear, but for the next three weeks at least, I’m doing what I’ve been doing plus some: staying home, walking the dogs at times and places where social distancing of about 300 yards is a given, and, uh, for a change, cleaning. Oh, and exploring the world of curbside grocery pickup. 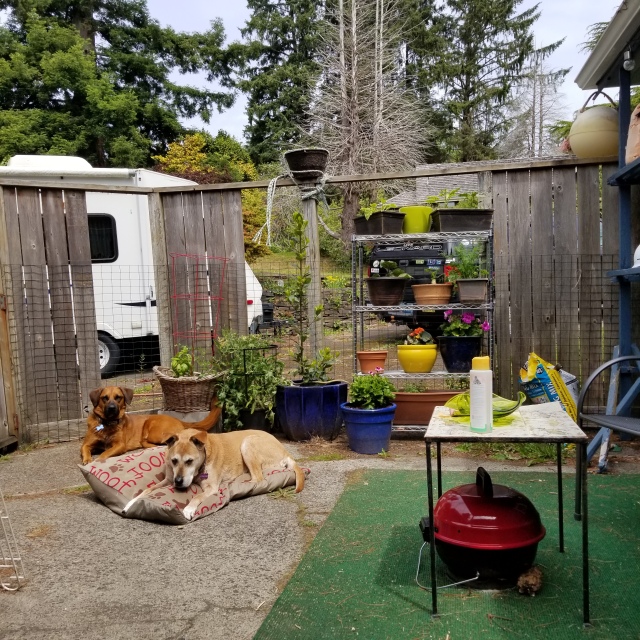 Home is where the plants and dogs are.