Today is a difficult one. It’s mildly interesting, the way the days are going – on some I am relatively productive and not freaking the fuck out all over the place and on others, forget it, I am just a bottomless pit of despair. Today is a despair day. I have managed to get some things done at work, which is a minor miracle, but the inside of my head is not a happy place. I probably shouldn’t look at Twitter at 6:30 am. The first thing I saw was a tweet about how stock in all the health insurance companies has risen dramatically since yesterday when Bernie left the presidential race and, I don’t know, I had to sit with that for a while and try not to just die screaming right then and there. Way to go, health insurance! Making bank off people dying! I’m sorry, but FUCK THE HEALTH INSURANCE COMPANIES. Now would be an excellent time to disband them. Everyone else is unemployed; they can just JOIN THE FUCKING CLUB. Nationalize them. Nationalize everything. Something, anything, because news flash: we are falling off a cliff into a depression that is going to make the 1930s look like a child’s picnic in the park. We are sinking. And there is nobody at the helm. 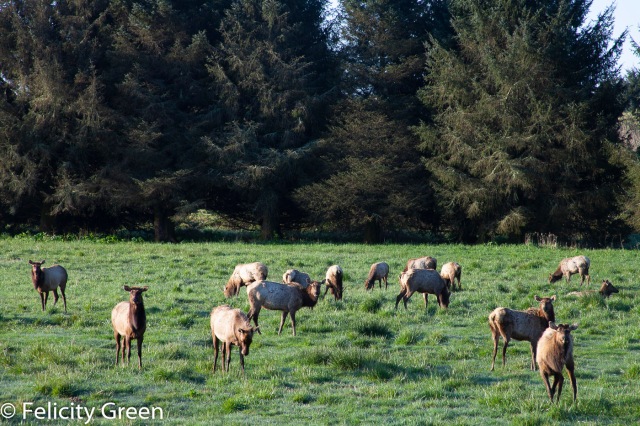 However, there are still elk. This morning I managed to get out of bed despite twitter and hauled myself and the dogs out to the dike trail and it was lovely as it always is if I get there early enough that no other dog walkers have gotten there yet. Which is to say, before, like, 8. And I was rewarded for my energy with elk. These elk in the picture, to be specific. I said good morning to them as I always do and I was proud of the dogs, who are so used to elk and deer now that they barely spare them a glance. This is, however, why the dogs cannot go off leash on the dike trail, because I am never going to put their elk indifference to the test. Elk will kill dogs but I don’t hold that against them.

Elk aside, it’s getting a little hairy. A family member texted me their will a couple days ago. I completely get the impulse – it was, in fact, me writing my own will out* that got me to revive this blog – but the reality that we have come to this, texting each other our wills, making masks, being afraid to go to the supermarket and trying to act like this is all just, you know, life as usual in these here United States, is somewhat unsettling. And John Prine died, goddamnit, while Boris Johnson is getting better and none of our goddamn bumper crop of fascist antique politicians even seem to be succumbing. I do not want anyone to die, okay, but if somebody has to go it might be nice if it was someone who is headed downstairs rather than up if you get my drift.

We are 25 days into this thing. There are six cases now in Clatsop County, or, rather, there are six people who have somehow gotten tested – I don’t know how exactly they managed that – and come up positive. There are increasing news stories that say as many as 1 in 3 negative tests may be wrong anyway. The federal government, or the utterly inept crime syndicate that passes for it nowadays, is not going to fund any more tests because it might make them look bad, so we will never know just how many people have it. We do know, however that 17 MILLION PEOPLE – including both my children – have filed for unemployment. They haven’t gotten it yet, but they’ve filed.

The beaches were closed and then they reopened and now they’re going to close for weekends and I can’t keep track of it, so we went ahead and headed to the beach this afternoon. It was cold and windy and amazing. Much better than the Riverwalk, where we went yesterday and where people have not gotten the memo about masks and social distancing. I have not gotten the mask memo myself, so I get that – I have that one paper mask that I wore to Costco, which seems like 30 years ago but I think was just a couple weeks – but it’s all I got and it should have been thrown away a year ago anyway after I wore it to sand the floors, so I am saving it for, I don’t know what. A ball maybe. I asked Metafilter if I could paint it and the answer was resoundingly NO with a unsubtle undertone of you are a dangerous dingbat who should probably be locked away for the good of the party. Metafilter is nothing if not relentlessly virtuous.

The social distancing thing here in Astoria seems to be limited to people over 30. Kids and teenagers are running loose – my neighborhood has always been full of free range semi feral children and the number has if anything increased with the pandemic – but bit by bit the reality does seem to be hitting home. I stopped by a weed store the other day and they were being extremely cautious, signs and lines and gloves and bandannas. You have to pump your own gas now, which I cannot believe was weird for me, after years and years of pumping it myself, but it was. Gas is cheap as hell but there is nowhere to go. You still can’t buy flour anywhere and I’m out of flour now.

I am scared, now. I wasn’t scared before but now I’m beginning to freak out a bit. I’m not worried about catching it and dying, although I probably should be: I’m more sort of low level with occasional spikes worried about the end of the world. I don’t even know what that means in this scenario but whatever it is, I’m worried about it. And I suspect we all are, and should be.

Stay healthy, y’all, this is the beginning of my weekend – giant sigh of relief, working from home is not getting easier either – so probably there will be another update soon. I am going SHOPPING tomorrow; it is payday and I need another giant bag of pretzel crisps. Snacks and sweats for the slo mo apocalypse; it’s a peculiarly American end of the world as we know it.

* in longhand, and I am fairly sure that the reason i did that instead of just typing it on the computer like a normal 21st century person is that I once read some mystery where the entire plot hinged on a will written out by hand, like, that was the legal will but if it had been typed? Bye bye millions. Or, in my case, bye bye 2006 Ford F-150, sorry kids, but the more I think about it the more I suspect that this half thought out knowledge from the back of my brain is actually wrong. What may have been true when Miss Marple roamed the crime ridden streets of Little Flake Eel, Notting, Sussex in 1933 may in fact not be true in 2020 Oregon. Go figure. I sorta doubt the texted will would hold up in court either but what the hell. It is what it is, which is disturbing as fuck, or, in other words, perfectly normal for the dulcet spring of 2020.