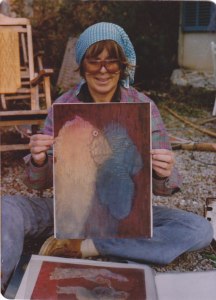 Annie passed away last Wednesday, July 22, just at about 4:45. My brother Bill was with her and I got back there just as she was leaving. She had spent the last two days in the Solace Hospice Center at CarePartners which is a kind of amazing place: I mean it is so fancy it makes the Grove Park look like Motel 6. And everyone is super nice and it is very quiet and serene and there are gardens and a walkway and a great room and inlaid floors and, well, if life must end it’s a good place for it to do so, I suppose. But I would prefer that it not do so, that everyone become like immortal vampires, frozen at, oh, about 35 or so. Like Annie is here, which is how I will remember her: all of Annie, all her wonderful self and great wit and peals of laughter.

I am surprised at how utterly sad I am. I mean, I love Annie (and I will not say love-d, no, I won’t put that in past tense because it has not gone away, far from it) with all my heart but hers was the kind of death that is generally put into the category of “blessed release.” She was 86 years old and in failing health; her mind had been fragmented repeatedly, first by the big stroke in 2008 and over the last year by whatever aging, fatigued synapses and neurons that kept giving way in her brain. She stayed alive long enough to see Oona (her stepdaughter, my stepcousin) one more time and as soon as Oona headed for her plane to Barcelona Annie put down her hands and proceeded with determination to die in earnest. It did not take long although every hour spent sitting in hospice is the same as 24 hours anywhere else. I tried reading to her from the Tibetan Book of the Dead (it is the way of our people, yes, that is what hippies do) but she said that it scared her. She asked if she was dying and I said, well, honey, pretty much. Soon after that she could no longer speak and I’m not sure if much got through to her, but I didn’t read any more Tibetans. Instead I read first from Thurber and then started a Blandings Castle novel by P.G. Wodehouse and we got through the first five chapters in two days. Every so often she would almost swim to the top of consciousness and when she did she heard about the exploits of Freddie Threepwood and chuckled. And that is a better way to die, perhaps, than explicit descriptions of the bardo and the hungry ghosts therein.

And I am devastated.

When my father died 15 years ago I was devastated, partly because it seemed too soon – he was 74 – and partly because it closed off the avenues for reconciliation I was still naively hoping would appear. 70s child raised on TV: where is my very special episode where Dad and I hash out our differences and admit our wrongs and express our love for each other and everything ends up okay? Well. We never had one and he died and that was that: there is no closure, you know, in real life. Or a laugh track, so it’s a trade off I guess.

When my mother died 7 years ago I was devastated, partly because it seemed too soon – she was 81 – and partly because I loved my mother so much -LOVE my mother so much – that I can’t even now quite express it. And partly because it was sudden and unexpected and there was no lengthy illness, no slow deterioration, coming up to it. And as she died I knew in my heart of hearts, although I would not then perhaps have admitted it, that my mother was the only glue holding our dysfunctional family together and without her it would all fly violently apart. Which it did. My son, grieving for Annie the other night, cried for his grandmother, my mother, her sister, as well: I miss her so much, he said, and when she died it destroyed our family. We have never come all the way back together since because yes, there is no closure, there are no neat, pat resolutions or redemptions in real life. There just is the is, the now, the stumbling and the four am tears.

So having been through all that, this death of all deaths, expected for a long time now, I thought would not destroy me. Annie and I had no unfinished business: we love each other, we got along like a house on fire, we always thoroughly enjoyed time spent in each others’ company and everything was good between us. Her loss isn’t going to fragment the family: there isn’t enough of it left to destroy for one thing and for another she was never the focal point in the way that Mom was. So why am I so sad? I keep asking myself, Why can’t I see this as a joyous thing, as her reunion with her many beloved friends gone before, as a return to the cosmos, a natural part of the cycle of life? And I’m trying to see that, I really am, but instead I am grieving, helpless, bereft and wondering why the hell the world is so unfair as to take away the people I love?

Because there is no closure, I suppose, and because the is is the only thing there is. Annie’s death brought a whole big giant list of tasks to my plate – I am the executor (I kind of want a costume for this job, a shiny suit and maybe a cape, THE EXECUTOR written in big letters on my chest) and that turns out to be a huge responsibility involving metric shit tons of paperwork and grief from everyone involved. Annie was also the last of her generation in my family: the grownups are all gone now, my parents, my aunt and uncle on my father’s side and now Annie – the adults have moved away and the children – particularly me, The Executor – are in charge. But I am not a child anymore – I could use a costume for that statement too, maybe a black one this time – just a sad grownup, in a messy house, with Annie’s things here and there in boxes, and I know for the next forever I will find them, as I did her shoes last night, and lose myself in just tears and sorrow.

Her shoes are here and she is not. And that just sucks.