I have a house. It has what I suppose must be considered a living room, or maybe a waiting room. My house was either built in 1966, which makes it more or less my age, or sometime in the early 50s, depending on who you ask.  A neighbor told me it was one of the first houses on this street but the city wrote every existent house down as 1966 because that’s when they all got connected to the city sewers. It looks mid century as it was built, and then it was added on to again and again, mostly in the 70s, oh yes, by a tribe of iconoclasts with little money or skill but boundless enthusiasm and a deeply strange source of random building materials. I am now one of this tribe, of course and it was me who cut the hole in the wall between the living room and the kitchen. One of these days when I am rich it will be me who raises the ceilings. However. That is not what this post is about. This post is about the goddamned undecoratable living room.

I have lived here for coming up on six years, now, and the living room is on its sixth or seventh, I think, redecoration. When I first saw that room I said, (to myself, of course) self, this room is too small for a couch, so you had better not even try. Chairs, I thought, comfy chairs. That looked nice, but nobody ever went in there but the dogs, because as large ass Americans, what we want is not to sit but to lounge like the Romans of old. They lounged, come to think of it, right through the collapse of their empire, just like us. Except we have TV, or, that is, you probably do, because I didn’t. Chairs and no TV and it looked very chic – although unsettlingly like a psychologists waiting room, lacking only a basket of kindly magazines and a white noise machine. I persisted with variations on that theme for several years, creating ever more elegant settings in which the books gathered dust and the dogs destroyed chairs, with humans venturing in only for the holidays –  when I set up a folding table – until finally I couldn’t stand it anymore and decided I had to have a couch.

I went to Target and bought a couch, or what I thought was a couch but which , on closer inspection, turned out to be a priceless medieval artifact: the Couch of Satan, known to Torquemada as an unparalleled tool for forcing heretics to recant. It was unsittable. Is unsittable, I should say, because it’s still lurking in the computer room, waiting to attack anyone foolish enough to spend the night here. You think I jest? Dude, even the dogs won’t sit on it.

Then, about a year ago, I decided that not only did we not need a couch, we didn’t need a living room, so I put a dining room table in there and announced that now we would sit around it and eat. And drink, and have conversations and even play Scrabble like the Bohemian intellectuals we are.  Which we did. Once. Then the room went back to the dogs and the dust for another year and I despaired because for chrissakes this house, or the top floor of it which is my domain, is only 900 square feet and none of that should be wasted. Bohemian intellectualism is all very well but it turns out that mostly I am alone here. When I am alone, particularly since my arm went useless, fuck sitting up straight in a wooden chair, I want to be supine like the good Roman matron I am.

I started looking at couches, a process that speeded up when my brother gave me his old giant TV. I want to be a normal American, I thought. I want to lie on the couch and watch movies and sloth out grotesquely  in a normal American way. The only silver lining to the messed up shoulder, by the way, is that I feel I now have tacit permission to do what the Brits call sod all and what we Americans call diddly squat on my days off. Of course, I always did that anyway but now I don’t feel guilty about it.

And then a couple weeks ago my friend Susan moved and gave me her couch. It is super comfortable and last weekend Audrey worked very hard moving furniture around as I pointed and now we have a couch and a TV in the living room. Like Americans! And all would be awesome except it turns out I was right and that room is just too small.  It has gone from being beautiful but useless to usable and kinda ugly. Ugly worries us unduly.Auds keeps saying I have to get rid of stuff I don’t want to get rid of, like books and the dogs’ chair and I keep saying it will grow on us.

And it might. When the TV starts working and the couch stops smelling like incense, not a smell I handle well. Which they will, I am sure, before the next rearrangement. I hope. Meanwhile, I’m shooing the dogs off the couch. 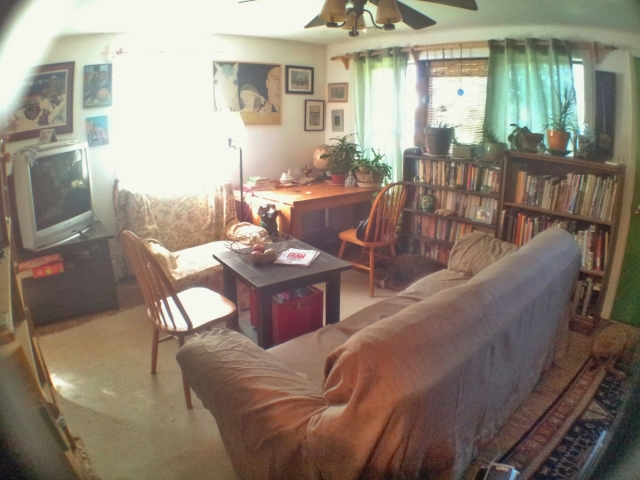 This entry was posted in Uncategorized and tagged house, redecorating. Bookmark the permalink.