Posted on February 2, 2014 by mygothlaundry 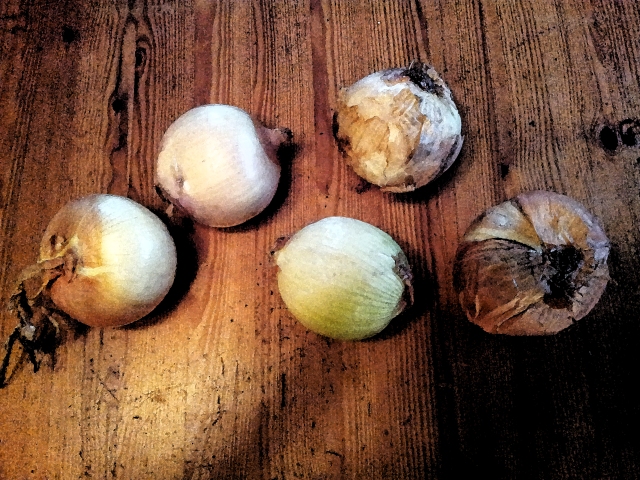 Yup, these are the onions from the header. I only put the header on today – I took a few pictures of onions, was irritated by the lack of sun streaming in the window and messed with them until I got one I liked.

I actually went to Ingles a year or more ago, when the title of this blog was first floating around in my head, to try to take pictures of, like, 6000 onions. Alas, the picture never happened. I lurked around in the produce section with my giant camera in my bag for a long time, but never quite worked up the courage to whip it out. I mean I lurked there for a while, until people started giving me funny looks and I finally fled ignominiously. That this is stupid I fully admit, but for some reason I was afraid that I’d be 86ed from Ingles and can you imagine the horror? Banned from the Haywood Road Shingles; it would be like being banned from Broadways without the crazy ass whoa factor. Being banned from Broadways is almost impressive, like, you must have done something truly over the top, but being banned from Shingles would just be pathetic. People would look at you funny and awkwardly change the subject.

This fear is not as insane as it sounds – a friend from out of town and I were at Greenlife shortly after it opened and he took a picture. The manager chased us down in the parking lot and raised hell; it was bizarre and uncomfortable and left me with the lingering feeling that photography is illegal in grocery stores. This is probably untrue but ah well, it left a scar and that is why you get a picture of 5 onions rather than 6000.

This entry was posted in Uncategorized and tagged onions, photoaday, photography. Bookmark the permalink.