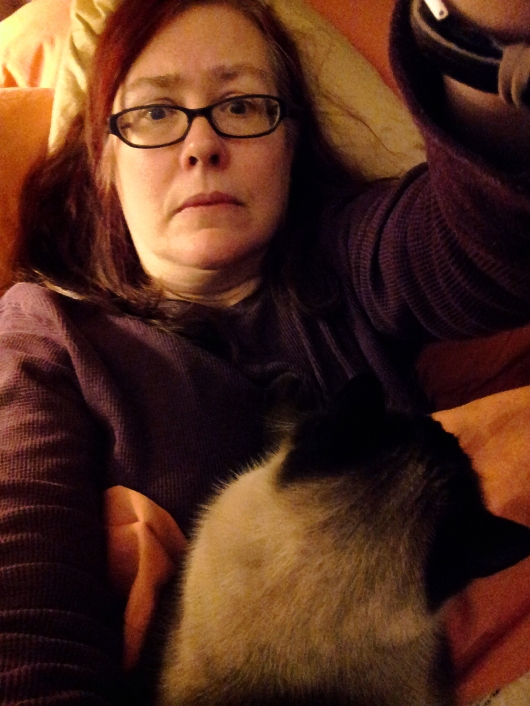 I was so tired when I got home from work yesterday – you would think by now that I would have learned I cannot go out on work nights but I still will do it and then bitch about paying the price – that I couldn’t come up with much of a picture. After a dinner of pure D comfort food I just went to bed with the camera and the cat and so here I am, crampy, cranky and cozy.

I am like the worst vegetarian in the history of vegetarianism; really, I have turned into one of those mythical vegans I used to make fun of, the ones who live on tater tots and PBR. Except in my case it seemed perfectly reasonable to have mashed potatoes and a croque monsieur (made with fake veggie ham, ok?) for dinner. Healthy! Balanced! Only about 7000 calories! But very, very comforting all the same.

The cramp thing is a problem. It’s one of those adolescent problems like zits that I thought would go away and somehow, didn’t. Zits are one of the worst things in that category, along with self consciousness and self loathing: adolescence! It never, actually, ends and there you are, or there I am, swearing at the mirror and applying unfamiliar makeup type things. I’m not good at the makeup thing and I hardly ever wear any but because I am female, I have a whole ton of random bits of it that I am desperately hoping won’t kill me despite their expiration dates of only a decade earlier. The only newish bit of makeup I own is some green eyeshadow I got to camouflage myself for Halloween, which somehow I suspect won’t hide a chin zit well. It doesn’t matter anyway, because you cannot hide a zit and to add total unfairness to injury, having zits does not in fact make you look younger. You just look like an old person with zits. It’s your choice as to whether you look like an old person with makeup on a zit or an old person with just a zit. The zit doesn’t care.

And then there are cramps, which just get worse, another thing I didn’t expect and so every so often I have to give up and go to bed. That would be terrible but fortunately, I have a cat and she approves of me going to bed whenever I want to do it. She won’t let me move much – Okra feels strongly that her human cushions should stay in one place for maximum cat convenience – but on evenings like last nights, that’s okay.